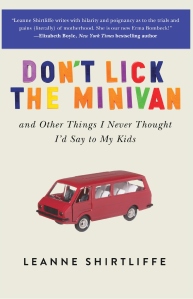 Leanne Shirtliffe (aka “Ironic Mom“) — the far-better and far-more-female half of Stuff Kids Write — has published a book!

Please check out her humorous parenting memoir titled Don’t Lick the Minivan by either clicking here or on the book’s cover you see to your left (no, your other left). Then buy it.

If you’re a parent, you’ll laugh and nod knowingly as you read Leanne’s honest, hilarious description of life with her twins (not those twins: her kids). If you’re not a parent, the book is a reasonably-priced form of birth control. Either way, it’s a win for you!

Following is a post from Leanne which first appeared on Stuff Kids Write in May 2011. It’s funny in a cringe-worthy sort of way and gives you a pretty good idea of what you can expect from Don’t Like the Minivan.

Soccer night. Two kids on two different teams playing at two different fields. I have enough equipment to load down a trio of Sherpas. My husband is at a meeting and, as usual, I’m barely coping in my attempt to get everything and everyone out the door. I send Vivian and William outside while I gather the last of the gear, which includes my mitts and sunglasses (nothing says soccer season in Canada like contrasting accessories).

The door slams behind me. I notice Vivian and William collecting rocks on the side of our driveway.

I load the last of the stuff and walk around to open William’s side of the van.

I see this writing: 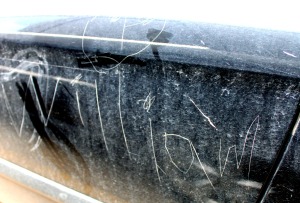 "William" (with sad face above)

“Did you use a rock to write on the van?” I say. Sometimes you have to ask the obvious.

Vivian looks at me. I can tell she’s stalling. “I’ll just crawl in William’s side,” she says.

“You didn’t write—“ I interrupt myself. “Did you carve things too?”

I walk over to the other side. 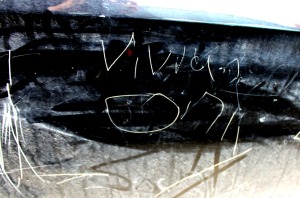 "Vivian only" (with scratches on the left, where she was trying to get the rock to work properly) 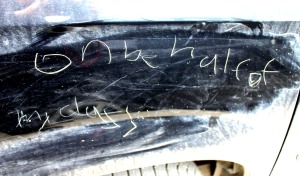 "on behalf of my class" (yes, she's composing dedications)

My kids know by my speechlessness that they’ve done wrong.

I rub my index finger across one of the gorges. “This won’t come off,” I say. “Ever.”