← In These Economic Times, It’s Important to Diversify Your (Lego) Portfolio
My Summer Plans? Play Star Wars, Swim, Maybe Kick Some But →

This is the phone conversation I had with my older brother last night regarding his middle daughter, Alice (age 8), and a number of other topics.

“I have something for you for that things-kids-write blog,” my brother says.

“Alice was at Sci Fi camp and needed her rabbit mask, so she wrote a note.”

My brain is processing too many things at once. I focus on his first five words. “Sci Fi camp? Like Science Fiction?”

My brother laughs. “No, Sci-Fi as in Science First.”

“Oh,” I say, “I thought she might be writing some Asimov or dressing up as her favourite Star Trek character.” 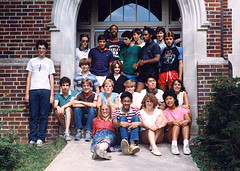 “You’re serious?” I’m only slightly weirded out by the fact I’m talking to my big brother.

“Ya, and my friend said that’s where he met the the first girl he ever made out with.”

I laugh. I’m pretty sure I’m spitting into the receiver.

“He’s from Wisconsin,” my brother adds. “But I think the camp was in Iowa.” This is not providing the clarity I need.

“Wow,” I say. Conversations between my brother and me are an exercise in Non-Sequiturs. I circle back to the original point. “About that Sci-Fi camp. Why did Alice need a rabbit mask?”

He says, “Each day is a different dress up day. It’s really smart. You can have kids bang rocks together all day and if they get to dress up, they think it’s fun.”

“Alice needed her rabbit mask,” he explains. “So she put a note on the fridge to remind everyone. She even drew a picture.” 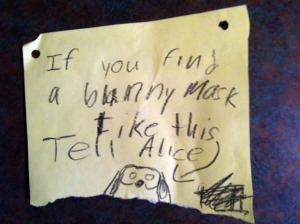 “But they weren’t dissecting bunnies?” Images of rabbit stew a la Fatal Attraction play through my mind.

“No,” he says, “just banging rocks together and dressing like animals.”

We cover 25 more topics in 3 minutes.

Leanne Shirtliffe is the author of SLOTH TO THE RESCUE, SAVING THUNDER THE GREAT, THE CHANGE YOUR NAME STORE, and NO MORE BEIGE FOOD (2016). She also wrote humor books DON'T LICK THE MINIVAN: Things I Never Thought I'd Say To My Kids and MOMMYFESTO. She and her family live in Calgary, Alberta because they like complaining about the weather.
View all posts by Leanne Shirtliffe »

← In These Economic Times, It’s Important to Diversify Your (Lego) Portfolio
My Summer Plans? Play Star Wars, Swim, Maybe Kick Some But →