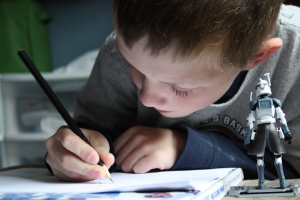 Tragically, millions of adults worldwide attempt to write humorous things on a daily basis with little to no success.

Take us for instance.

Kids, on the other hand, often compose side-achingly hilarious quips with no real intention of being humorous. They’re pint-sized poets viewing the world through Groucho Marx glasses who scratch out their observations on whatever is handy. Writing funny stuff just comes naturally to them.

Sort of like their crazy flexibility. You know, how small children can just drape their ankles up behind their necks like Romanian gymnasts without even thinking about it? Their innate ability to write humorously is just like that.

So we decided to start a site featuring the genius of the baby bards among us. Our own children have written crazy funny things and we figure so has pretty much every other kid in the universe because of that Romanian gymnast writing trait mentioned earlier.

But in order to showcase the real humorists we need your help!

Here’s a prompt to get you started. With Mother’s Day around the corner, grab a kid near you and ask: